Just the second-youngest British to have ever won the lotto, winning about $3.67 million, Rogers had spent all the money on booze, two boob jobs and almost $500,000 on cocaine. 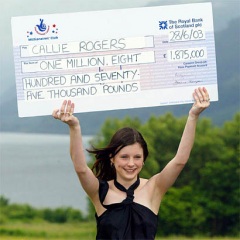 Here’s a girl who understands priorities. Callie Rogers, 22, who won the lottery when she was 16-years-old is now regretting having gone on a “never-ending spending spree” at such a young age.

Just the second-youngest British to have ever won the lotto, winning about $3.67 million, Rogers had spent all the money on booze, two boob jobs and almost $500,000 on cocaine.

About $400,000 was spent on a family holiday and $730,000 on designer clothes, while a large amount was also spent on a string on boyfriends.

When she won the million-dollar prize, she was earning almost $7 as a shelf stacker for her local supermarket. Now she lives at home with her mum.

“I honestly wish I’d never won the lottery money – and knowing what I know now I should have just given it all back to them,” Ms Rogers said in an interview with News Of The World.

“I was just too young to cope with suddenly having that amount in the bank when I’d come from nothing.

“In the past six years I’ve sunk into a black hole – a black hole that at one point I thought I could never crawl out of.”

The lowest point was when she came close to committing suicide after dating a drug dealer in 2008.

“I honestly just felt so low I thought in death I’d find a safer happier place,” she said.