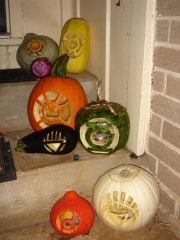 In brightest day, in blackest night. No candy shall escape my sight!!!

“I found each logo online and simplified them to stencil form and printed them. I opened and cleaned out each pumpkin/squash, taped each stencil to the proper fruit and used a push-pin to transfer the pattern. I then used a pumpkin carving kit to cut out each logo. Some fruits were easier to carve than others – the green one had really hard skin that made it almost impossible to carve. For indigo I just used a marker – a blueberry is impossible to carve.”

Amazing is all I have to say. I honestly attempted to do this myself but gave up after I butchered a regular pumpkin and ended up just making pumpkin mush. True story.