Yup… that pretty much sums it up.

Yup… that pretty much sums it up. The gang over at Warpzone have pretty much captured everything that is wrong with what has come out of Michael Bay’s mouth about his planned TMNT minus the TM film.

You just can’t take the teenage mutant out of Teenage Mutant Ninja Turtles. That would be like an Incredible Hulk movie and adding in giant mutant poodles… oh wait… that did happen.

Still, based on what he did with Transformers alone, Bay should not be allowed near anything that I love. Unless he wants to get near a family member for the sole purpose of giving them some of his millions. that would be ok.

Official Description:
So we heard recently that one of our favorite shows from childhood, Teenage Mutant Ninja Turtles, is about to be raped by director Michael Bay in his next movie.

He has said that instead of sticking with the classic tmnt origin story, where the turtles become who they are as a result of toxic ooze, in his version they will be aliens that come from outer space and won’t even be teenagers! They’ll be adults. They’ll be aliens. They’re going to be GROWN UP ALIEN NINJA TURTLES! WTF?!

So we made this parody of the awesome TMNT theme song…

Enjoy and please spread the word! 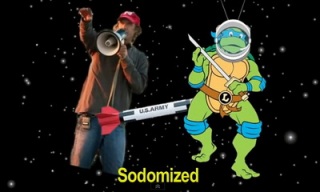