Hell hath no fury like an Internet-savvy woman scorned especially in the digital age where Google is technically a virtual God.

Hell hath no fury like an Internet-savvy woman scorned especially in the digital age where Google is technically a virtual God. One poor sucker had to learn the hard way…

Jack Weppler dumped his girlfriend (reasons unknown), apparently she didn’t appreciate that at all. But she didn’t get mad (oh no, she didn’t get mad!) she got even, by transforming his photo into an Internet meme and spammed it all over Google Image when his name is searched.

Jack’s mom has recently took to Google Webmaster Help to beg for assistance on her son’s behalf:

My minor son’s ex-girlfriend took a copyrighted picture of him (we own copyright) and uploaded it more than 60 times to a website. On each image she wrote slanderous, defamatory and pornographic captions. The webmaster of the site states he removed the images 6 weeks ago, but Google Search still shows all the images. My son is so stressed out and embarrassed and we’ve done everything we can to get images off of Google including URL removal tool, a letter to Google Legal with all the URLs because of copyright infringement, and nothing has worked!

Lesson learned? Before you piss off your girlfriend, make sure she isn’t a SEO genius. 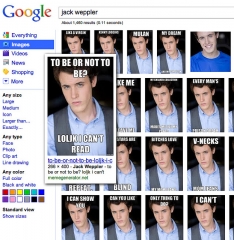