Peak to Peak Charter School in Lafayette was shut down Wednesday morning after a large duffel bag containing a Kermit the Frog. 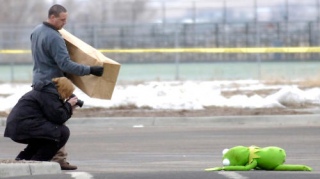 Peak to Peak Charter School in Lafayette was shut down Wednesday morning after a large duffel bag containing a Kermit the Frog — which appeared to have blood stains on it — was found on the west side of the campus.

Police were called to secure the perimeter around the school, while students and staff members who had already arrived at Peak to Peak were locked down in a building on the east side of the campus.

Using a robot equipped with movable arms and a camera, members of Boulder County’s bomb squad were able to examine the items that were inside the duffel bag– including the Kermit the Frog plush doll — at a safe distance. An officer then made a final inspection of the abandoned items in person to make sure everything was “absolutely safe,” Battersby said.

The school was cleared just before 10 a.m., but Peak to Peak remained closed for the day since many of the students did not make it to the campus before police blocked access.

“We’re always glad when this type of situation turns out not to be a dangerous situation,” said Briggs Gamblin, a spokesman for the Boulder Valley School District. “But we believe our parent community — whether at a regular school or a charter school — expects us to treat each incident seriously.”

Alicia Thomas, the mother of four Peak to Peak students, said that while one of her daughters believes the mysterious Muppet might have been part of a senior prank, she applauds the careful approach.

“I’d much rather be cautious and miss a day of school than have someone (at Peak to Peak) trying to decide if it’s a prank or not,” she said. “I think that if we don’t have people taking those steps, stuff will happen.”