Look At This Fish Inside a Jellyfish

A little while ago, I was talking about the awesomeness of science. It’s images like this that remind me that nature is pretty damned awesome too!

A little while ago, I was talking about the awesomeness of science. It’s images like this that remind me that nature is pretty damned awesome too!

There’s a lot that goes on under the sea that we rarely, if ever get a chance to see with our own eyes. This is one of those things. The image was captured by an Australian ocean photographer, that has the internet collectively pooping itself, is of a fish, helplessly counting the seconds until its own demise from inside the belly of a Jellyfish. 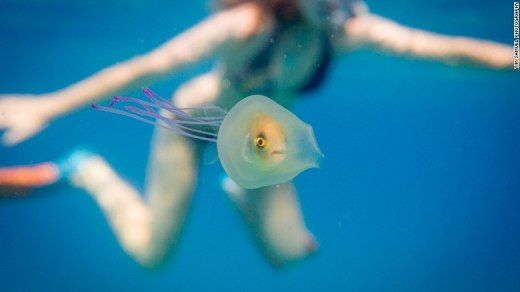 The photographer who gets credit for the images is Tim Samuel, a self-described “ocean obsessed… lover of photography and adventures.” the image, according to Tim, was a complete fluke. He was out photographing sea turtles with a friend when they happened upon the jellyfish.

He was only able to get a few good shots, as the small animal was very hard to focus on, but he did follow it for close to a half hour. When he posted the image on his Instagram account, he mentioned that the .
The fish, which was still alive, was trying to swim but the jellyfish kept veering it off course.

Amazingly, these images might not be as tragic as you’d expect. Ian Tibbetts, a marine biologist at the Center for Marine Science at the University of Queensland, said:

“The fish could be a juvenile trevally, which are known to use jellyfish stingers as protection. It’s difficult to tell whether disaster has just struck, or whether the fish is happy to be in there,” he is quoted as saying. Although by the photographer’s description of the fish swimming, my guess is that it is probably quite happy to be protected in there” 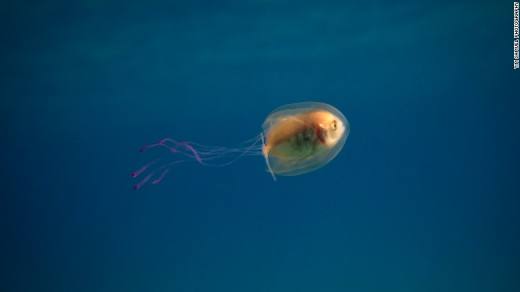