“It’s-a-me, a-Mario, I’m more Italian than pastrami, I’ll take you by the peaches and give you the hot salami.” – Mildly NSFW

Newgrounds users from the early 2000’s will probably remember an animator named Egoraptor. After developing a huge following on both Newgrounds and Youtube, he started up a channel called Game Grumps where he essentially just played video games on screen with partner. His new partner, Danny Sexbang of Ninja Sex Party.

Now, in addition to the daily video game videos they put out that reach over 120k viewers, they’ve come together to form a new music group, Starbomb, and Egoraptor has just released the animated video of their first single, Luigi’s Ballad.

What up, bitch
I got a one-up, bitch
What’s inside the question block; it’s my dick
It’s-a-me, a-Mario, I’m more Italian than pastrami
I’ll take you by the peaches and give you the hot salami
I save you from dragons and evil Boos that are spooky
Must I be a raccoon to get inside your tanooki
I will mount you like Yoshi and show you things you’ve never seen
My mushroom’s now mega, if you know what I mean
So suck it

[Danny Sexbang]
Mario, you always do this shit
I like a girl and then you ruin it
By yelling stuff about your dick
Until they go away

Hey Luigi, it’s okay
That Mario’s a bit risque
Just tell me what you need to say
Please don’t be afraid

Oh, princess, it means so much for me to hear you say that
The only thing I’ve ever wanted to tell you is that-goddamn it

I’m here to pleasure that ass
I’d like to go first, princess, but I always come last
And you say we’ll get together but I’m jacking off alone
Koopa Troopa skeletons are the only dry bone
I am tired of the running ’round it’s such a fucking hassle
I go through shit and then you’re in another fucking castle
You gotta think about it, well I don’t believe the hype
You’ll have a lot of time to think when you are smoking on my warp pipe

O-M-G, I can’t decide
On which of you should be the guy
To take me on your mustache ride
That’ll redefine my life

I’m ready to give love a shot
It’s not about how many coins you’ve got
I just know I like you a lot
[Ego] Yo, sluts, check out my yacht (Ugh)

[Danny] Let me take you on a magic kart ride
[Ego] I’ll bust all your balloons when I smack your backside
[Danny] We’ll have such fun, I’ll bring my friends along

I’ll kick that Donkey Kong right in his konkey dong
Come on, Peach, it’s time to make your choice
I’m the only plumber that can your boobies rejoice
Green, lanky-ass brother ain’t got shit on me
It’s time to live out our story, of the princess and the pe-
Nis

[Ego] So, who’s it gonna be, princess?
[Rachel] I choose…Toad
[Both] Toad?!
[Rachel] Well his whole body’s shaped like a dick
[Both] Oh yeah, mmmhm, yeah, definitely, mushrooms look like dicks 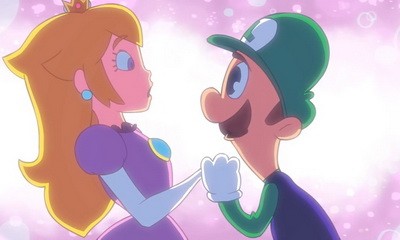