Man Claims To Have Captured A Real-Live Fairy In Mexico

An unemployed 22-year-old bricklayer from Mexico claims to have found and captured a fairy, a type of mythical creature supernatural and/or preternatural in origins. 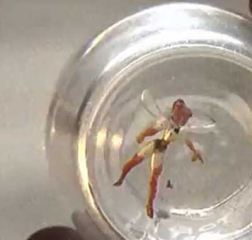 An unemployed 22-year-old bricklayer from Mexico claims to have found and captured a fairy, a type of mythical creature supernatural and/or preternatural in origins.

“I was picking guavas and I saw a twinkling. I thought it was a firefly. I picked it up and felt that it was moving; when I looked at it I knew that it was a fairy godmother,” says Jose Maldonado.

Maldonado is now charging a monetary “donation” to those who are interested in seeing the fairy which he has preserved in a small container filled with formaldehyde. He says he has already received 3,000 visits from people eager to see the so-called fairy at his home in Lomas Verdes, one of Guadalajara’s poorest and most dangerous neighborhoods.

The tale of the fairy that Maldonado claims to have discovered last weekend has run like wildfire through the area and his home is now besieged by the curious, some of whom wait for up to an hour to enter, according to what Efe was able to verify on Thursday.

What Maldonado shows the paying public is a small container filled with formaldehyde containing a humanlike figure about 2 centimeters (0.8 inch) tall, with a gelatinous consistency and a certain resemblance to Peter Pan’s Tinkerbell.

According to Maldonado, what seems to be just a little plastic figure is a fairy and that it was alive when he found it. And there are those who believe him. “I’ve seen everything and, yes, I believe the fairy is real. Therefore, I wanted to come to confirm that those myths are true,” Cesar Ramirez, one of the visitors, said.

To be allowed to examine the “fairy” for a few seconds and take a photograph of it, the curious must make a donation to financially help out Maldonado, who recently lost his job. His neighbours have also taken advantage of the situation to sell photographs and keyrings with the image of the fairy for about 20 pesos ($1.60), as well as refreshments including drinks and food to those people while they wait in line outside Maldonado’s house.