Just about the only thing I can think of that’s cooler than this new toon is the fact that there are actually Mechawhales figures that you can buy!

I first heard of the Mechawhales a couple of days ago when I saw the toy solicitation in an email newsletter that I get. They were created by German character artist Hauke Scheer, and they were so cool that we had to share them with you. The Mechawhales are whales that humans have teamed up with in the future to fight aliens. To help them in the battle, the humans have built exo suits for them that allow them to walk on land and kick major ass!

Along with the toys that are already starting to come out (Mechawhales.com), Hauke has released 2 animated shorts about the adventures of the Mechawhales.

The first short sort of just sets up the story and gives you a basic idea of who is who. The second one is where things really start to get good. I can’t wait to see more of these and I can’t wait till my Mechawhale arrives so I can review it for you. 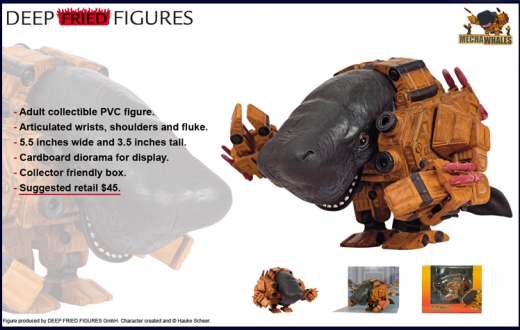