Meth dealer who laundered drug profits by purchasing comic books is in danger of forfeiting his collection to the government. 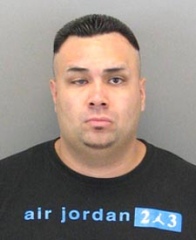 A large-scale methamphetamine dealer who allegedly laundered drug profits by purchasing valuable comic books is in danger of forfeiting his 18,753-volume collection to the government.

Geeky comic book collector and meth dealer Aaron Castro, 30, currently owns a comic book collection valued in excess of $500,000. But he may soon lose it all as Federal prosecutors have recently filed a U.S. District Court complaint seeking ownership of the comic books. Castro is currently facing a May trial in Colorado on narcotics distribution and weapons charges.

The forfeiture complaint recounts a government interview with Lonna Gwinn, who said she sold meth for Castro.

“Gwinn said that Aaron began to struggle with money because he would spend his drug money on comic books.” According to Gwinn, she would meet Castro “at comic book stores to give him the drug money and had seen Aaron buy a box of comic books.”

A second admitted dealer told investigators that he helped Castro organize his comic books, “which he confirmed were purchased by Aaron with drug proceeds.”