Military Dad Surprises His Son on His Birthday, Disguised as Captain America

Excuse me for a moment… I’ve got a little something in my eye.

In what might be one of the coolest military homecomings that we’ve ever seen, a Military dad surprised his son when he came home from Afghanistan by dressing up as Captain America.

The child, who had just had his birthday a couple days earlier and was running around the house in his own Captain America costume when his dad appeared at the door. Several minutes pass before the son sees who is behind the mask. He even tells Cap that his father is currently in Afghanistan.

When his secret identity is revealed, the look on the boy’s face is just about enough to crack even the hardest of hearts. 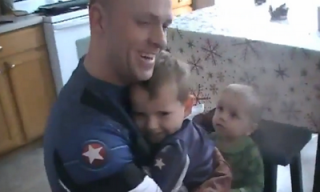