the internet is full of stupid trends. Last year it was Planking and then that stupid thing where people would throw ice cream at fast food workers. This year, we started things off with Hadukening, the trend of taking photos where it looks like people are taking the brunt of a force punch.

Now, just a week later, we’ve got an even newer trend, Vadering. In this one, people jump up in the air and pretend that they are on the receiving end of Darth Vader’s Force Choke. 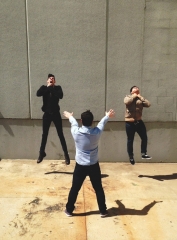