After a week, the story of the mysterious time traveling woman has been busted by real science.

We’ve all been captivated with the time traveler mystery that set the net a blaze this week, when Irish filmmaker George Clarke noticed a woman in the old 1928 Charlie Chaplin film “The Circus” holding what he described as a cell phone to her ear. From the video, it appeared as if the woman was using a modern mobile device and the only possible explanation for this discovery, according to Clarke, was that she was a real life time traveler.

Well, after a week, the story of the mysterious time traveling woman has been busted by real science. According to experts, she wasn’t holding a cell phone to her ear, but rather she was just hard of hearing and was using an old-timely hearing aid known as an “ear trumpet”

Below is an image of the ear trumpet which historians have provided to LiveScience. 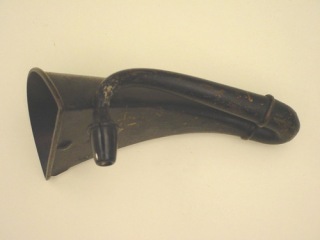 “As you can tell from these, old-fashioned mechanical or resonating hearing aids were not necessarily long and rounded,” said Philip Skroska, an archivist at the Bernard Becker Medical Library of Washington University in St. Louis. “Short, compact rectangular forms were not unusual.”

In other words, they could look something like a cell phone to imaginative YouTube viewers in the 21st century.