This is one of the coolest medical advancements in a while.

Burn wounds suck. I’ve been lucky enough to never have any that need hospitalization, but I’ve reached into a 600 degree pizza oven without my mitts more than a few times in my days. It just sucks on every level from the wound care, to the pain, and the insanely long recovery times you need after skin grafts. That’s why RenovaCare is so awesome. That’s not even hyperbole. They are awesome. I am in awe of their new tech.

The company has developed a new technology called CellMist. When used it conjunction with their SkinGun (worst penis euphemism ever!), it can be used to spray a burn victims wound’s with their own stem cells. This method, which “sprays the delicate cells so expertly it covers 200 times more surface area than conventional methods, gently enough that over 97 percent of the cells remain viable and able to regenerate,” results in skin regrowth in as little as four days compared to the weeks that it can take for a skin graft to take hold. Amazingly, it’s able to harvest your cells and convert them into the spray in just around 90 minutes after you get to the hospital. 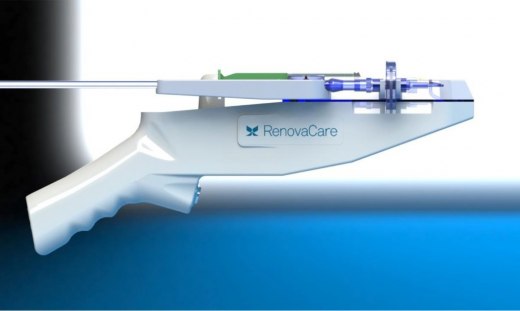