The folks at Activelink are hoping to turn sci-fi into reality with this robotic exoskeleton suit that gives its puny human operator superhuman strength! 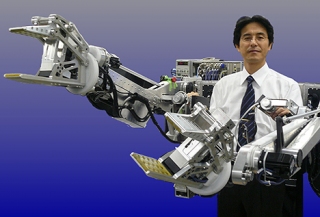 The clever folks at Activelink, a Kyoto-based subsidiary of Panasonic, are hoping to turn science fiction into reality with this awesome robotic exoskeleton suit that gives its puny human operator superhuman strength!

Dubbed the “Power Loader” suit — which shares its name from the fictional hydraulic exoskeleton suit appearing in the 1986 sci-fi classic “Aliens” — it is built on an aluminum-alloy frame and weighs 500 pounds. Described as a “dual-arm power amplification robot,” the exoskeleton suit is currently equipped with 18 electromagnetic motors that enable the wearer to lift 220 lbs with little effort. Not impressed? Well, the Power Loader also features an intuitive control system which provides direct force feedback, allowing the operator to directly feel the movement of the robot while controlling it. So rest assure, you don’t have to worry about pulling a Lenny here.

The only difference between this suit and the “Aliens” version is that instead of carrying cargo around on a spaceship, this suit is meant for more everyday wear and to aid with heavy lifting, particularly in construction and disaster relief operations.

The Power Loader is still in the development, but Activelink plans to have a marketable version of the suit by the year 2015. Pre-ordering most likely available.