The answer is a super rare, earless bunny named Til. Til was being celebrated earlier today at a small zoo in Germany. With Easter just around the corner and… with Germany’s apparent obsession with cute furry critters, he was to be unveiled today with all the glitz of a movie star at his own press conference.

No one is sure exactly what happened next, but somehow little Til ended up on the floor where a clumsy cameraman accidentally stepped on and killed him.

The good news is that the zoo director said that Til would have felt no pain because he was killed instantly under the boot heel of the German cameraman.

While the whole world surely mourns the loss of such a cute and adorable creature, I’d just like to take a moment and point out the bright side of the story:

Germany is obsessed with cute, furry critters. Given their past, this is the best news I’ve heard in a long time! 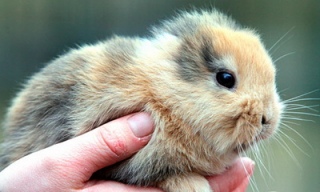