Even geeks fall in love and get married… they just do it with more style. 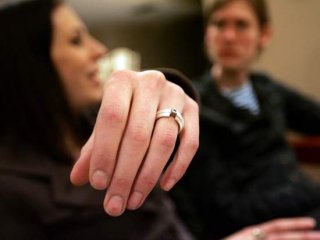 Self proclaimed “sci-fi dorks” Alissa Mellis, 27, and Justin Gruba, 28, recently won the Science Center’s “Star Trek: The Exhibition” Ultimate Wedding Package Contest by nabbing the most online votes beating out nine other couples who got engaged at the exhibit on Valentine’s Day.

The lucky couple will win wedding amenities that include “a ceremony inside the exhibit, a reception for up to 200 guests at the Science Center and a two-night stay at a “Star Trek” suite at the MGM Grand Detroit.”

Mellis and Gruba started their romance when they first met in a basic paint class at the College for Creative Studies in Detroit.

Both are not ashamed to open up to their nerdy side says Mellis, who, along with Gruba is a fan of typical geek fare such as “Dune” novels, “Battlestar Galactica,” “Star Wars” and obviously, “Star Trek.”

Of course, “that’s not to say they’ll have a phalanx of Klingons at their wedding. They want to project a fun sort of elegance without conveying silliness,” according to reports.

While many may think the “Star Trek” wedding is a little bit geeky, Gruba believes there’s significance to it.

“There are two visions of the future,” says Gruba. “One is pessimistic and apocalyptic. ‘Star Trek’ symbolizes hope, knowledge and exploration.” 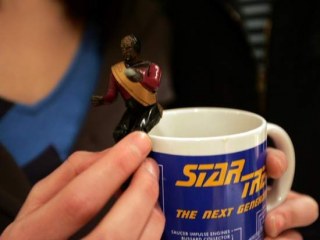