These are the cakes that give Duff Goldman Nightmares. And the kind that’ll eat you instead of you eating it.

These are the cakes that give Duff Goldman Nightmares. Sure, they aren’t edible, but they are freaky as hell. The cake artist responsible for these diet inducing delights are the work of one Scott Hove and they will be on display at his show, “Iced Out” starting this Friday at the La Luz de Jesus Gallery and running until April 25 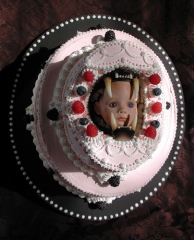 According to the gallery:

“Iced Out” is a celebration of the artificial, and acknowledges our tendency to embrace illusion in order to feel safe and receive emotional gratification. The fake cake sculptures, with their display of beauty and potential for satisfaction, lure the viewer into a sense of anticipation. They also contain elements, not immediately seen, that create a sense of anxiety and fear. This in turn creates a visual and emotional resonance that is intended to represent what we all have to deal with in our lives everyday…
the hunt for satisfaction, and the anxiety that we won’t get it.

As far as the art goes, Scott Hove’s works encompasses a broad variety of media, from sculptural installations to painting. The cakes are formed using carvable polyurethane foam and plywood. They are frosted with a variety of acrylic media and accessorized with fake fruit and other objects found in stores or on the street. The materials and techniques borrow from traditional and decorative arts and craft to render the oftentimes jarring objects and fantasy installations.