A mother-to-be, who was banned from marrying after social workers said she is not intelligent enough, is forcefully having her baby removed from her at birth. 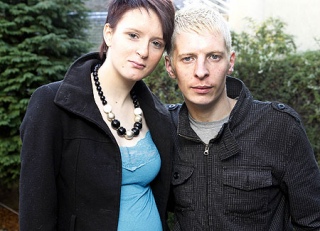 A mother-to-be, who was banned from marrying after social workers said she is not intelligent enough, is forcefully having her baby removed from her at birth.

Kerry Robertson, 17, suffers from mild learning difficulties and is 26 weeks pregnant, has been told that she will not be allowed to bring up her own child, who she has already named Ben.

Last month Miss Robertson was prevented from marrying her fiancé Mark McDougall, 25, after council officials claimed that she “did not understand the implications of getting married”. She has now been warned that she will only be allowed a few hours with her baby, which is due in January, before it is taken into foster care.

“I couldn’t believe it. I am so upset – I can’t stop crying.” says Robertson.

McDougall, an artist, said he wants to take on full responsibility for his son but claims that he is powerless because he is not married to Miss Robertson. “Social Services are ruining our lives. As we are not married – because social workers would not let us marry – it seems I have no rights as a dad at all. Kerry’s gran is trying to apply for custody of Ben but social services have already told us it is unlikely she will be successful. We feel helpless.”

Under Scottish law, a registrar may refuse to marry a couple if they believe one or both the parties lack the mental capacity to understand what the institution of marriage is about. The couple’s wedding was halted 48 hours before the two were due to walk down the aisle when, Dunfermline Register Office refused to sanction the marriage after Fife council wrote a letter of objection.

The couple had planned to get married after Miss Robertson became pregnant. Two days before the ceremony, two social workers visited their flat and told them that the marriage was illegal because of Miss Robertson’s learning difficulties.