If you are gonna get your wookiee washed, this is probably the best way to do it.

If you are gonna get your wookiee washed, this is probably the best way to do it. If this video proves anything, it proves that Seth Green is the luckiest man on earth.

Official description:
The last remnants of the Empire have been defeated, and it is a period of peace in the galaxy. The Jedi Order, no longer needed in their role as defenders, have scattered across the stars and started new lives…while the Sith wait quietly hidden in their midst.

Such a Jedi and her Sith counterpart have found common ground and established a new business together on a remote planet. United by a love of animals and a belief in the force, they have rededicated their lives to the art of grooming.

Their latest mission leads them to the base of a former Rebel. Though the war is over, they have not forgotten where their true allegiances lie… 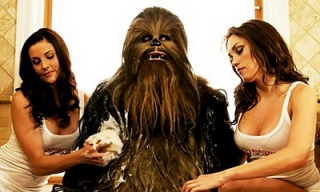