SHOCKER – Sanrio Admits HELLO KITTY is NOT A CAT!!!

OK… here’s my problem with this. If you add up all the fact, Hello Kitty is a 25 inch tall, one pound, perpetual eight year old human girl?!? It was way less freaky when we all thought she was a cat!

In the last few hours, the internet was rocked with news that is going to anger a lot of people and confuse a lot of slashfic writers. Despite the fact that Hello Kitty looks like a cat and has been marketed as a cat for several decades, it now turns out that she is in fact not actually a cat.

Hello Kitty is 40 years old this year and the city is Los Angeles is preparing to celebrate the pop culture icon with a full-blown retrospective of Kitty art, merchandise and fashion at the Japanese American National Museum, which opens in mid-October, followed by Hello Kitty Con, two weeks later at the Museum of Contemporary Art.

The discovery about the common misconception was uncovered by Christine R. Yano, an anthropologist from the University of Hawaii. She’s actually spent several years studying Hello Not a Kitty and has penned the book: “Pink Globalization: Hello Kitty’s Trek Across the Pacific.”

While preparing for the upcoming exhibition, she had described Hello Kitty as a cat, only to be corrected by Sanrio:

“That’s one correction Sanrio made for my script for the show. Hello Kitty is not a cat. She’s a cartoon character. She is a little girl. She is a friend. But she is not a cat. She’s never depicted on all fours. She walks and sits like a two-legged creature. She does have a pet cat of her own, however, and it’s called Charmmy Kitty.”

Here are some more official facts about Hello Kitty that most people don’t know:
– Hello Kitty’s real name is Kitty White
– Her parents’ names are George and Kitty White
– She’s from London
– She’s a Scorpio
– She loves apple pie
– She has a twin sister named Mimmy White
– In regards to her age, Hello Kitty is a “perpetual third-grader”
– When Hello Kitty was created in the early 70’s, Japanese women were obsessed with London and the idealized British culture.
– Her official height is recorded as 5 apples tall (which would translate to just over 2 feet)
– Her official weight is recorded as 3 apples (this would be equivalent to 1 pound)

OK… here’s my problem with this. If you add up all the fact, Hello Kitty is a 25 inch tall, one pound, perpetual eight year old human girl?!? It was way less freaky when we all thought she was a cat! 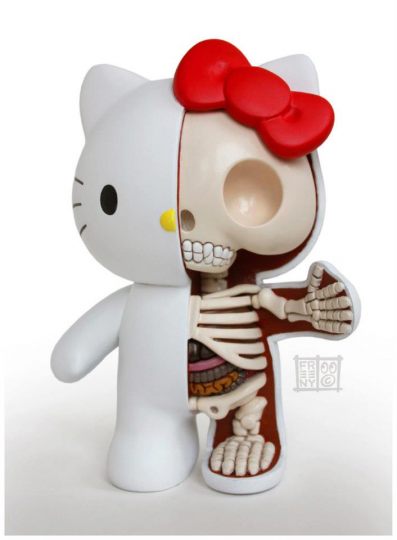