In a battle of pirates vs ninjas, I’ll take these ninjas any day of the week.

Deviant Artist genesischant has a real treat for us today. He’s taken the characters from Marvel’s Avengers and DC Comic’s and Re-imagined them as people from the Sengoku period of Japan. Wikipedia says that the Sengoku period (戦国時代 Sengoku jidai?) or Warring States period in Japanese history was a time of social upheaval, political intrigue, and nearly constant military conflict that lasted roughly from the middle of the 15th century to the beginning of the 17th century. Among the people who inhabited that time period of Japan were more than a few Ninjas and Samurai.

Along with creating some amazing drawings, he also wrote up descriptions for each of the characters. Those can be found on his Deviantart Page. We’d love to see more from this guy, so far, we are pretty floored by his work. 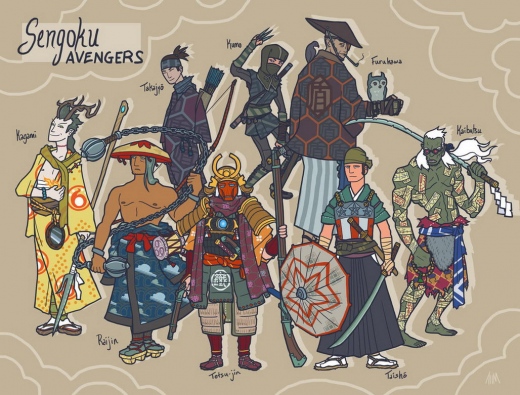