The Most Expensive Car Accident In The World!

A multi car pile-up in China consisting Ferraris, Lamborghinis and Mercedes racked up more than $4 million dollars in damage over the weekend. Details after the jump.

While you were dealing with holiday shopping traffic over the weekend, a group of Chinese car enthusiasts were living their worst nightmare. According to Jalopnik:

A group of foreign car enthusiasts were heading to Hiroshima from Kyushu when one of the drivers lost control trying to overtake a car on a wet, curved part of China Road in Yamaguchi Prefecture. The Ferrari driver reportedly hit the median and created a reaction that caused the other cars in the lineup to crash.

Reports have the total property damage estimate as high as $4 million dollars!

Japanese news sources are reporting a list of the vehicles that were destroyed in the accident:

– 8 ferraris
– 3 Mercedes
– 1 Lamborghini
– 1Skyline
– 1 Prius That died feeling more special than any other Prius that has lived before it. 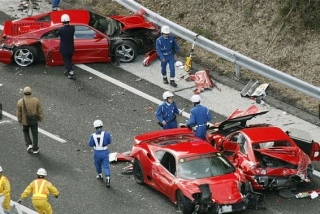