The Trademark Infringement is Strong in These Chinese Star Wars Minions

Come on… who wouldn’t love a Bob Vader in their stocking this year?

Sometimes, the best part of being a fan is looking at the ridiculous pirate products that come out along with it, trying to steal some juice off a company’s trademark. Now, I’m not saying that China has a reputation for stealing intellectual property, but they do make pretty much all of the pirated goods that pop up on the market.

One thing they’ve been doing for a while is PVC figures. These are actually great if you have a kid who loves Pokemon but don’t want to pay more than 20 dollar to get them 100 little figures. These Chinese companies hawk pretty much any PVC figure you can think of from Disney to Nintendo, Pokemon, and more.

Now, it looks like they are hoping to create a little bit of pirated X-Mas magic with this completely illegal figures that combine The Minions of Despicable Me (Let’s not even mention the Minion movie here… that was just a pile of hot garbage), and Star wars.

Come on… who wouldn’t love a Bob Vader in their stocking this year? 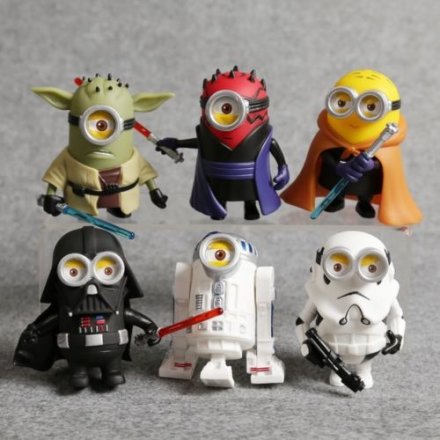 If you feel like breaking the law, you can pick one up HERE