Tony Lucchese and Sarah LaFore love a good production. So for their big day they’ve decided that it would be fun if “Superman could say his vows to Wonder Woman.” 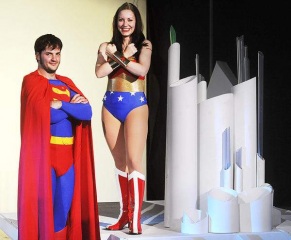 The Sun Journal recently wrote about a couple who decided to stage a superhero style wedding with their very own Fortress of Solitude altar.

Tony Lucchese, 31, and Sarah LaFore, 34, love a good production. So for their big day they’ve decided that it would be fun if “Batman could rappel from the ceiling,” if “Superman could say his vows to Wonder Woman” and if “the whole wedding party — and guests — could dress up.”

The superhero idea first surfaced when the two weren’t even engaged. What’s odd, however, is that neither is a huge comic book fan. Although Lucchese did used to wear a Superman T-Shirt and could comb his hair into the perfect Superman “S” curl.

In all, “Aquaman, Flash and Spider-Man round out the groomsmen,” while ten bridesmaids will be Amazon warriors — based on Wonder Woman’s Amazonian mythos.

The couple expects 85 guests and plan three cakes: “One with Wonder Woman and Superman on top, one with Marvel figures and a third for DC characters.”

And instead of flowers, they’ll decorate with superhero paraphernalia.

“Everyone involved is doing a few extra crunches and forgoing a few extra desserts during the week to pull off spandex,” said best man Eric Kieschnick of Pennsylvania. “It’s the opposite of a gut-hiding cummerbund.”

Kieschnick’s father, dressed as Jor-El, Superman’s dad, will have the honor of marrying them.