Too Fat to Consummate Your Wedding? Try the Sex Ramp!

No thanks, I’ll take the stairs 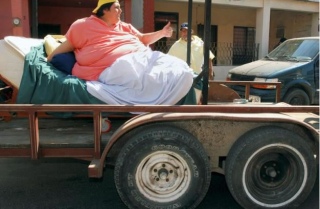 No, its not some exotic position from the Kama sutra. Its the story of the world’s formerly fattest man and his wedding night. Stuff.co.nz is reporting that Manuel Uribe married two weeks ago. There was no limo or carriage for this groom though. He was carted off to the wedding on the back of a flat bed truck. Don’t feel bad for the morbidly obese groom. He actually shed a good deal of weight for his special day. He went from 1254 lbs all the way down to 660.

Despite the weight loss, His bride still couldn’t quite find Manuel’s what nots. That’s where his friends stepped in. Knowing that its just not a proper wedding until you’ve consummated… his buddies built him a a “sex ramp.”

The three-foot long ramp, with reinforced concrete let him raise the lower half of his body so his new bride could access his private parts better.

Uribe told the Daily Star he and his wife have “finally had sex and we are a true couple in the eyes of God”.