Officials declared the molded gun could not go on the plane because it was a “firearm.” 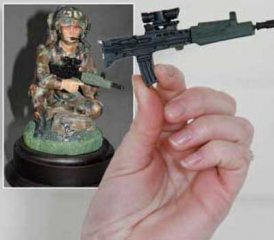 A tourist who tried to take a model soldier on a plane was shocked when airport officials ordered him to remove the collectible’s three-inch gun – as it was a safety threat.

Canadian tourist Ken Lloyd bought the nine-inch model soldier holding a replica SA80 rifle during a visit to the Royal Signals Museum at Blandford Camp, Dorset. But when trying to pass through security with the keepsake through Gatwick Airport in his hand luggage it triggered a security alert at the scanners. Officials declared the molded gun could not go on the plane because it was a “firearm.”

Mr. Lloyd was forced to snap off the model weapon – which was then posted back to their home in Ontario, Canada. He said: “As the figurine’s SA80 rifle was pulled from the box, the security search officer contacted her supervisor.” The molded SA80 could not pass. My wife asked for a ‘reality check,’ explaining how this offending piece of sculptured molding is a 9 inch painted model with a molded and painted rifle that is part of the figure.

“The supervisor was confident within the surety of the regulations and a ‘firearm’ is a firearm and cannot pass. The rifle could not travel; she would have to return back to the main airport concourse. The two patrolling policemen didn’t seem to mind. They didn’t even notice. The numerous security people sitting around the concourse didn’t leap to their feet as she passed.”

Mr. Lloyd hopes that this story becomes “part of Gatwick’s unofficial mythology of how unthinking regulations successfully protected the free world from the threat of terrorism.”