It doesn’t matter if you love rap or hate it… This is epic!

True, this is not the normal type of thing that we post on the site, but it was just too damned awesome to ignore. At the Coachella Festival, they were able to bring Tupac back as a Hologram to perform a couple of songs with Snoop Dogg.

When the hologram image of Tupac first rose from the floor of the stage, the crowd went insane and several people didn’t even realize that it was a Hologram. I’m not sure what they thought it was… but I’m pretty sure that there was LSD involved.

We don’t know if the hologram was just created off of old footage or if it was something more. All we know is that it was extremely lifelike. He was dancing around, grabbing his junk and pointing the mic at the audience!

Then, at the very end, a light shines down on him and he fades into thin air.

I don’t care if you hate rap, you’ve got to give them some credit for that performance. 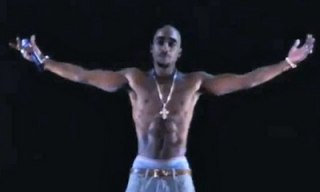