Turkey: Unsafe At Any Speed

The woman is in serious condition. All of us here at YBMW wish her a speedy recovery… and to all those who doubted me. Suck it.

This story hit’s very close to home here at YBMW central. You see, a long time ago, deep in the heart of America’s Wang… also known as Florida, I was in a pretty nasty car wreck. The thing that set this wreck apart for my family and friends was my seemingly ludicrous claim that the accident was caused by a wild turkey running under my car and getting caught up in the wheel. Despite the multitude of feathers at the scene, many of those close to me never truly believed that you could total a Chevy Cavalier on Thanksgiving dinner. To make it worse, it was a wild turkey… bourbon jokes abound.

That is until today, nearly eight years later when I can finally show that I’m not the only one.

A woman continues to recover Monday after being struck in the face by a wild turkey while riding her motorcycle in Florida.

The 42-year-old woman was knocked unconscious in the weekend incident, and her motorcycle ran off a Sarasota County road and struck a barbed-wire fence.

The woman is in serious condition. All of us here at YBMW wish her a speedy recovery… and to all those who doubted me. Suck it. 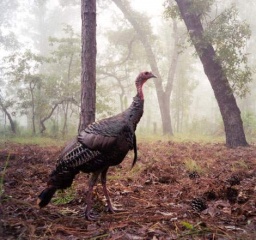