Video Gamers May Have Just Taken A Big Step Towards Curing AIDS!

Next time someone yells at you for playing too many video games, you can just tell them that you are working hard to help cure a disease!

Foldit is a video game that I’ve spent way too much time sucking at for the last couple of months. It is one of the most interesting puzzle games that I’ve ever come across. What sets this game apart from others is that Foldit actually has real world applications. The puzzles in the game are real protein folding computations that biologists have been trying to solve so that they can cure diseases and come up with vaccines and new medicines. It sounds really complicated, but it i actually an addictive puzzle that falls somewhere between a Rubik’s cube and origami.

One of the puzzles in the game was a retrovirus protein that scientists had been trying to figure out for over a decade. On Sunday, after just three weeks in the game, players were able to decipher it and have now opened a whole new avenue in the potential to fight AIDS.

“The protein, called a protease, plays a critical role in how some viruses, including HIV, multiply. Intensive research has been underway to find AIDS drugs that can deactivate proteases, but scientists were hampered by their inability to crack the enzyme’s structure.” 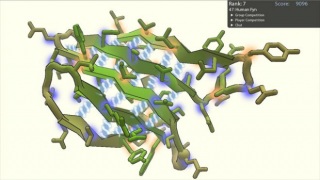 One thought on “Video Gamers May Have Just Taken A Big Step Towards Curing AIDS!”