Check out the best part of Disney’s Star Wars weekends, the ultimate dance off between the Empire and the Rebel alliance.

Wookie southern HQ has been in Orlando for longer than the site has been alive. While we try to bring you some coverage from Disney’s Star Wars Weekends every year, this is the first time that we’ve actually had a chance to visit ourselves.

If you’ve never been, Star Wars Weekends are a set of four weekends between May and June where they take the Disney Hollywood Studios in Orlando, FL and let Star Wars take over. There are Imperial motorcades roaming through the park, tons of characters walking around and interacting with guests, celebrities who not only do signings, but also do panels and demos. We didn’t have a chance to check it out, but Ray Park (Darth Maul) was giving a martial arts and lightsaber wielding demonstration.

They have a great exclusives and shopping area (even though we did have to wait three hours in the line to get into it) where you could not only buy awesome exclusives like a life-sized Salacious Crumb or a statue of Donald Duck as Boba Fett, but you could also get laser scanned so that you could have either your own version of yourself frozen in carbonite or a stormtrooper statue with your head on it.

As great as all that stuff was, everyone knows that there’s really only one real reason to go to Star War’s Weekends… Snig and Oopla’s Hyperspace Hoopla! This is a nighttime show that has been going on for at least the last three years. There’s a little bit of story to it, but it essentially breaks down to a dance off between the the Empire and the Rebel Alliance. We’ve posted the last couple of Hoopla’s on the site, but we can now tell you that, if you are a Star Wars fan, seeing this in person is something you need to add to your bucket list. 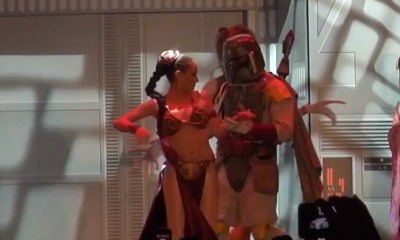 As this year is the 30th Anniversary for Return Of the Jedi, the theme for the show was music from the last 30 years. It featured songs from The Beastie Boys, Michael Jackson, Queen, Skrillex, The Black Eyed Peas, and Daft Punk, as well as newer stuff like Macklemore’s Thriftshop and a mash up of Gangnam Style and MC Hammer’s Too Legit To Quit. There was even a complete Star Wars Harlem Shake.

Along with Greedo making his first appearance in the show this year, this is also the first time that Jedi Mickey Mouse appeared in the show and danced. Still, as always, Chewbacca stole the show.

There are a few videos of it out already from last night. I have posted a couple for you so you can decide how you want to watch it.

This version is probably the best overall.

This one seems to have the best full stage coverage, but the worst sound and video quality:

This one has the best video and sound quality as well as the best tight shots on the action, but it means that sometimes you miss some of what is going on on stage: