What If: ‘Terminator 2’ Was Written By Shakespeare?

Ever wonder what “Terminator 2” would have been like if it was written by Shakespeare? Well wonder no more, thanks to a Nashville theater company

Ever wonder what “Terminator 2” would have been like if it was written by Shakespeare? Well wonder no more, thanks to a Nashville theater company who have faithfully been trying to translate the entire in its entirely into Shakespearean verse. In addition to the new dialogue, it will be renamed to “Terminator the Second”

Here’s an official statement from the organizers of Nashville’s Husky Jackal Theater company:

“You’d be amazed by how perfectly the themes so pervasive in Shakespeare’s plays lend themselves to the story of the Terminator: horrific prophecies, charges of madness, the terror of an implacable enemy, the fierceness of a mother’s love for her son. While it’s loaded with outrageous action sequences, one-liners and comic moments (which we’ve worked hard to honor), Terminator 2 is a theme-driven film that invests heavily in its main characters. In our reworking, we were continually struck by extended passages from Shakespeare that seemed as though they could have been written specifically with these late 20th century characters in mind.”

Below you can see a picture of a script sample. Head over to the Husky Jackal’s Kickstarter page for more information. 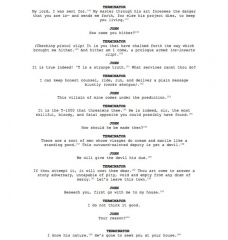