Woman Determined To Become Fattest In The World

Donna, who wears XXXXXXXL dresses, eats mounds of junk food and tries to move as little as possible. 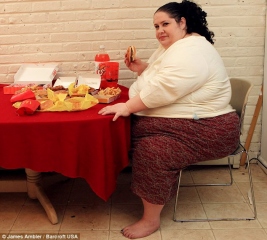 Donna Simpson already weighs 43st (602 Lbs), but she is determined to nearly double her size to become the world’s fattest woman.

The 42-year-old from New Jersey, US, is set on reaching the 1,000lb mark (71st) in just two years. Ironically she insists she is healthy, despite now needing a mobility scooter when she goes grocery shopping.

Donna, who wears XXXXXXXL dresses, eats mounds of junk food and tries to move as little as possible.

Ms Simpson already holds the Guinness World Record as the world’s fattest mother, when she gave birth in 2007 weighing 38stone.

She needed a team of 30 medics to deliver her daughter Jacqueline during a high-risk Caesarean birth.

Yet although she can only move 20ft before needing to sit down, she wants to be even bigger. ‘I’d love to be 1,000lb,’ she says.

‘My favourite food is sushi, but unlike others I can sit and eat 70 big pieces of sushi in one go,’ she said.
‘I do love cakes and sweet things, doughnuts are my favourite.’

To achieve her goal, Donna says she will need to eat up to 12,000 calories a day (the average woman should consume only 2,000.)

To fund the massive $750 weekly food shop, she runs a website where men pay her to watch her eat fast food.

‘I love eating and people love watching me eat,’ she said.

‘It makes people happy, and I’m not harming anyone.’ 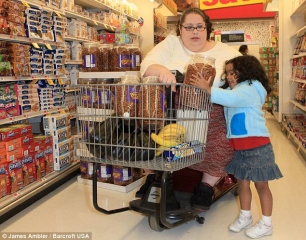