A Brazilian model who became the world record holder for have the largest breasts in the world must now undergo surgery and is possibly fighting for her life. 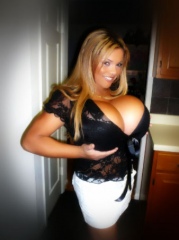 A Brazilian model who became the world record holder for have the largest breasts in the world must now undergo surgery and is possibly fighting for her life.

Sheyla Hershey became the world record holder for having M-cups but had removed them and downgraded to a smaller size after learning that she was pregnant in 2009.

After more than 30 plastic surgeries, Hershey suffered her first complication following her most recent breast augmentation procedure in June. A severe staph infection reached both of Hershey’s breasts. According to Hershey, she says the new surgeon told her she should be concerned for her life. Staph infections can enter the bloodstream and be life threatening.

Because of the severity of the infection, doctors also believe that she may be in jeopardy of losing a breast. She has had to give herself infusions of intravenous antibiotics every twelve hours to fight the infection. The treatment has helped one breast, but not the other. That would mean that she will not only lose both implants, but quite possibly need to have the entire breast removed. Doctors took Hershey into surgery on Tuesday morning to remove the implants.

“I had large fever and painful. I just couldn’t breathe properly; it was terrible! I was in bed all day, couldn’t get up,” says Hershey.

Hershey says she is trying to work through her obsession with plastic surgery. She says she wants to just be a mother. Her young son has asked her for a while to reduce her breast size. Even though she is being forced to do so because of a medical emergency, she admits that it is time.