You Do Not Play On The Millennium Falcon Guitar, It Plays You!

Now the only question remains, can it do 0.5 past light speed?

Take a look at this custom electric guitar design and built by Travis S. Using an original Millennium Falcon toy, it was incorporated over a hard maple backing block attached to a purchased neck blank. The six string guitar even comes with light-up engine blocks.

Here’s what Travis S. had to say himself:

I used a vintage Millennium Falcon toy / playset for the body. As it’s an electric guitar, the body material is relatively unimportant (in comparison to acoustic instruments) so i just had to concern myself with building the necessary structural elements of the instrument into the toy.

Since the aging plastic wouldn’t be able to withstand the tension of the strings, I pieced together a maple block running from end to end inside the ship. The bridge, neck, and strap pins connect to this piece; while attached firmly with some powerful glues the toy itself is almost entirely cosmetic.

The top of the toy has been routed out for the electronics, including some switch activated LEDs. Those required separate battery packs, which I made accessible using the structure of the toy; one pack is hidden in the original battery compartment while the other is attached to the ramp door that was designed to open.

Now the only question remains, can it do 0.5 past light speed? 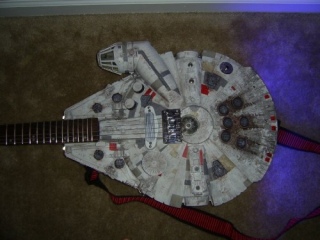