This seemingly affordable and one of a kind outfit was worn by Craig for several years on in the popular television series and is one outfit every wannabe Barbra Gordon dreams of owning.

The original Batgirl costume worn by actress Yvonne Craig from the 1960s campy Batman TV series is currently being auctioned off with an opening bid of $2,000.

This seemingly affordable and one of a kind outfit was worn by Craig for several years on in the popular television series and is one outfit every wannabe Barbra Gordon dreams of owning.

The costume will come with a utility belt (red wig not included) and can be your if you bid now at iCollector.com.

Here’s the auction description:
An original production made complete Batgirl costume used by Yvonne Craig in the classic TV superhero series with screen worn elements. This is the original cowl used in the first appearance of Batgirl on the television show, which was supposed to be for a Batgirl spin-off series. Ms. Craig complained of the points cutting into her cheeks, so they made another rounded cowl which was used during later episodes. This is the cowl used in that first episode and there are many photos of her wearing it. The costume includes; unitard, utility belt, gloves, boots and cape. The black unitard and boots are not seen on-screen and were likely an alternate or prototype version that were not used on-screen, possibly because of similarity to the Catwoman outfit, but they were made for the production and ordered from Western. Includes paperwork and authentication from Western Costume as well as letters detailing the history of the costume from the original owner. Yvone Craig examined the costume and told the current owner the story about the cowl. Also includes an autographed 8″ x 10″ color publicity still signed by Ms. Craig (of her wearing the cowl) and an original Superhero Collectibles Auction 94 catalog featuring the costume. Costume comes off life size female mannequin. 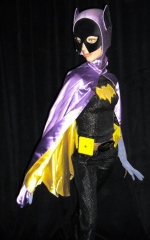 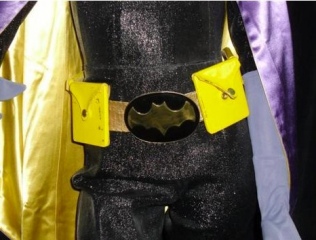 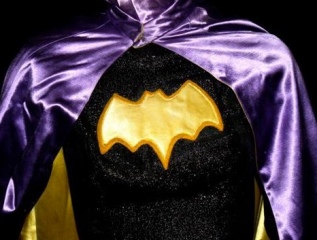