…I wonder if the Winklevoss twins will sue for not being included in this.

…I wonder if the Winklevoss twins will sue for not being included in this. Zuckerberg: The Musical is an Facebook Opera from Joe Sabia and the CDZA project. The project is described as a trip down memory lane for the life and times of Mark Zuckerberg, the man who may very well become the owner of the most valuable company in the world by the end of the week.

The opera isn’t so much about Zuckerberg as much as it is about Facebook itself. Still… it is clever. 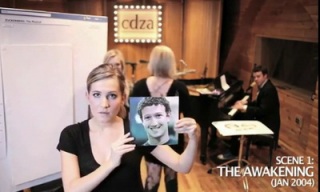