Geek Girls are on the rise, but there are still some people out there who just don’t get it. I’m not talking about the asshats pushing that whole Gamergate thing. Anyone who threatens to rape someone because they are worried about video game reviews deserves to get their nuts dipped into a bullet ant nest. That said, that’s not what we are here to talk about. DC has just released a couple of new t-shirts and it looks like whoever designed them either doesn’t respect the role that strong women play in geek culture or they have a super odd sense of humor.

The two shirts in question are one that says “Training to be Batman’s Wife,” and another that features Superman and Wonder Woman kissing with the caption: “Score, Superman Does it Again!”

While I don’t find the shirts completely offensive, for example, “Training to be Batman’s Wife” is a cute gift for a bride to be having a comic book themed wedding, I do think they are pretty poorly conceived. What do you think? 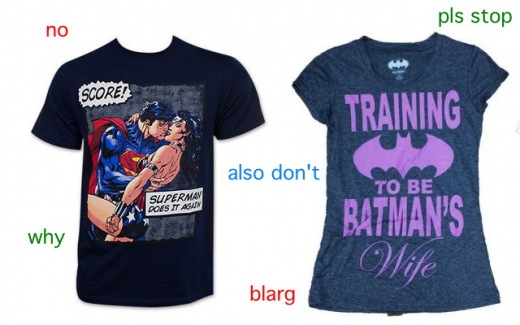