Originally created by Crispin Porter + Bogusky, the King was meant to be edgy targeting men in their teens and 20s. 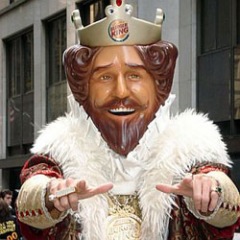 After nearly a decade of being creepy and annoying, fast-food chain Burger King is changing their marketing strategy by axing their “King” mascot and focus on … wait for it… actual food.

Originally created by Crispin Porter + Bogusky, the King was meant to be edgy targeting men in their teens and 20s. Crispin’s campaigns drew a lot of attention, unfortunately, however, advertising awards don’t necessarily translate into sales, and Burger King has been badly lagging main rival McDonald’s.
According to consulting firm Technomic, Burger King’s same-store sales declined 6% in the first quarter; compare that to a 3% rise for Mc Donald’s.

Now, under new ownership, and with a new management and marketing team, Burger King is focusing on what matters: updating the stores, fixing its food and changing its image.

“People want a reason to go back to Burger King … There are no plans to bring the King back anytime soon,” Alex Maccedo, SVP of marketing told USA Today.

So what can we expect with Burger King’s latest commercial campaign? How about a commercial introducing the California Whopper, made with guacamole. Like whoa!