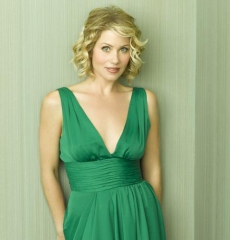 Stuff.co.nz just reported that Christina Applegate, the girl who first won her way into the hearts and fantasies of men in “Married With Children” and “Don’t Tell Mom The Babysitter’s Dead,” has decided to buy herself a new pair of breasts to replace the pair she had removed after she was diagnosed with cancer earlier this year.

Despite the cancer treatments and the grueling schedule of keeping up with her hit show, “Samantha Who?”, She’s full of fight.

“I still have quite a process until this is done. Yes, it’s hard. It sucks. But I’m not a victim.”

In fact, in a recent interview with TV Guide, she revealed that she’s completely changed her perspective on life. “I started looking for a beach house the day I found out I had this little disease. You just kind of go, ‘What are you waiting for to get the things that you want and the things you dream of?’

“I don’t own tomorrow or yesterday – today is all I’ve got. And if I don’t make today good, then I’m only going to be pissed off tomorrow! I’m very much a push-through-it kind of gal.

“But now I don’t. I speak up for myself a lot. If I feel tired, I ask for the time that I need. I’m living such a different life than I did before.”

Christina also revealed she is looking forward to having the reconstructive surgery, because she can’t wait for new “cute boobs”.