Fans will probably never stop mourning the loss of David Bowie, but in his absence, he’s inspired tremendous expressions of art all around the world. The newest tribute comes from the Ukiyo-e Project, and ukiyo-e artist Masumi Ishikawa. If you are not familiar with Ukiyo-e, it is the traditional Japanese art form of woodblock carving.

One of these is inspired by Brian Duffy’s photograph of a bare-chested Bowie with a red lightning bolt scrawled across his face the cover of “Aladdin Sane” (1973). For the ukiyo-e print, the artist imagines Bowie as Kidomaru, a fictitious snake charmer from the Kamakura period.

The second print was inspired by Terry O’Neill’s “Diamond Dogs” promotional photograph (1974) in which Bowie is posing with a large barking dog. For this ukiyo-e print the artist imagines Bowie as Takezawa Toji, a magician and entertainer who was often depicted by Utagawa Kuniyoshi. 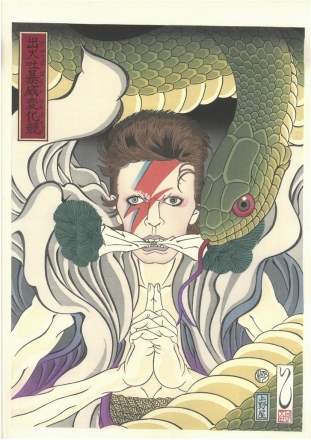 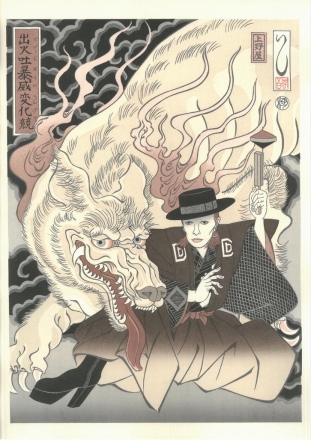