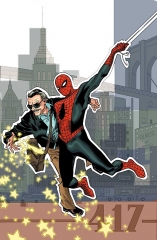 Stan Lee is best known for co-creating Spider-Man, the Fantastic Four, the X-Men, Iron Man, Hulk, Thor, Daredevil and many more in the Marvel universe.

While Stan The Man is no longer actively creating comics or outstanding and iconic superheroes, he’s still hard at work in an industry he helped to revolutionized and making his guest appearances in several of Marvel’s upcoming film projects such as Kenneth Branagh’s “Thor” and Jon Favreau’s “Iron Man 2.”

Recently, the POW! Entertainment founder told MTV News about his love of Twitter, which reminds him of the days of Stan’s Soapbox, a popular column within comic books that let creators reach out to fans.

“[I’m] able to write any thoughts that I had and put them down and maybe somebody is actually reading them,” said Lee. “The only frustrating thing about it is keeping it to 140 letters, because I’m a very long-winded guy.”

So once again, happy birthday Stan. Thank you for all you’ve done, and what you will do in the future.