New PETA ad with Joanna Krupa has the Catholic Church up in arms for unknown reasons. 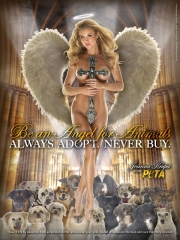 A new PETA advertisement featuring model Joanna Krupa wearing nothing but a crucifix has the Catholic Church up in arms.

Krupa, a Playboy cover girl and a “Dancing With the Stars” regular, is seen topless and bottomless in the latest nude ad by the People for the Ethical Treatment of Animals, which urges people to adopt pets from rescue shelters instead of buying them from puppy mills.

Appearing nude with angel wings and a digital halo, the Polish-born beauty has her private parts covered… barely with a well-placed crucifix. Below she is adorn with all sort of dogs.

“It’s totally inappropriate,” said Deal Hudson, publisher of InsideCatholic.com, an online magazine. “It’s another instance of disrespect toward Christianity and another example of the kind of abuse that would never occur with any other major religion, because the outcry would be so immediate and so loud that the people behind it would immediately retreat.”

Krupa defended nudity earlier this year, claiming the human body is a work of art.

“I think worrying about going topless in a photo shoot or film is really ridiculous,” she told FoxNews.com’s Pop Tarts column in an exclusive interview. “And the fact is, Pope John Paul said, since we were born naked, it is art, and it’s just showing a beautiful body that God created.”

Personally we don’t know what’s so shocking about this ad, we think it’s totally appropriate and tasteful.