Kal Penn, now rubbing shoulders with politicians instead of Hollywood actors and producers. 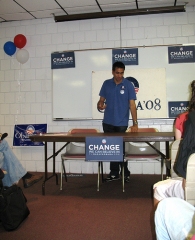 Kal Penn, who plays Dr. Lawrence Kutner from the hit TV series “House” is leaving the show in order to pursuit a new career at the White House.

Best known as Kumar from the stoner comedy “Harold & Kumar Go to White Castle,” Penn tells Entertainment Weekly that it was his idea to leave the show because he’d recently received the opportunity to work as the associate director in the White House office of public liaison.

“I was incredibly honored a couple of months ago to get the opportunity to go work in the White House. I got to know the President and some of the staff during the campaign and had expressed interest in working there,” says Penn.

Penn believes the “opportunity to serve in a capacity like this is an incredible honor” and has always expressed interest in public service ever since he was a kid. “[I] went to a performing arts high school, but I still took a bunch of those dorky political science classes.”

He attributes his interest in politics to his grandparents who had “marched with Gandhi in the Indian independence movement.”