The chap stick has a “caramel popcorn” vibe with an aroma that “smells like what a cheddar bay biscuit would smell if you put maple syrup on it”.

In a move that looks more like Red Lobster would rather borrow ideas from KFC than come up with their own, the “seafood” chain has created lip balm that is inspired by their famous cheddar bay biscuits. The only hitch is that they apparently don’t even taste like the free food that outshines anything on Red Lobster’s menu. According to Refinery29, the company that created it, the chap stick has a “caramel popcorn” vibe with an aroma that “smells like what a cheddar bay biscuit would smell if you put maple syrup on it”.

The last part is either great or bad news, depending on whether you wanted this for yourself or if you shudder at the idea of kissing someone with this mess slathered on their lips. The gimmick was created to celebrate the 25-year anniversary of the Cheddar Bay Biscuit and was only given out to 250 new members of the Fresh Catch Club. It’s not been announced as to whether they’ll be offering them up again, or if it was just a one time stunt.

On the upside, if you want some Cheddar Bay Biscuits, but hate the idea of actually going to a Red Lobster, the company now sells an instant mix for them that can be bought in grocery stores around the country. 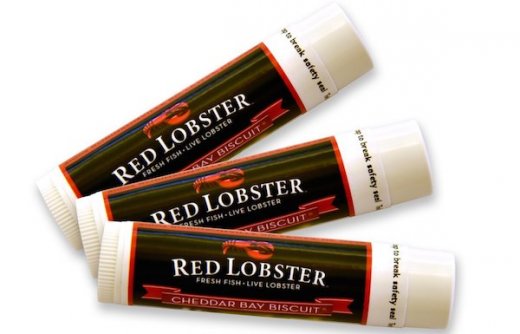