“Consenting adults… having a little fun [but] are now victims of having personal property stolen.” 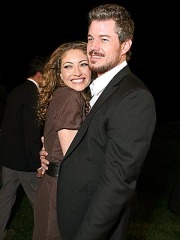 Former beauty queen Kari Ann Peniche, the other woman in the leaked video with Eric Dane and Rebecca Gayheart, has revealed some details about the tape that has taken the Internet by storm this week.

Kari Ann also says that the video was saved on her computer until her hard drive was stolen by her roommate at the time, Mindy McCready, after her stint on ‘Celebrity Rehab’ for drug abuse.

The model believes that McCready had taken her hard drive as payback over money issues when she moved out.

A stolen property report was also filed with the LAPD but nothing came of it. Then last month Dane and Gayheart got in touch with McCready, imploring that she keeps the contents of the drive private and Kari Ann thought everything had been taken care of until the tape suddenly surfaced this week.

“Kari Ann is extremely upset over this situation,” says her publicist. “She considers Eric and Rebecca dear friends, and this is an unfortunate incident where consenting adults who were having a little fun are now victims of having personal property stolen and private matters made public.”