Leonard Nimoy To Retire From Acting

It’s been a long journey, but after 60 some odd years, Leonard Nimoy, has decided to retire. 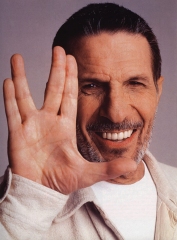 It’s been a long journey, but after 60 some odd years, Leonard Nimoy, 79, who’s most famous for his role as Spock on Star Trek has decided to retire.

According to an interview with Toronto Sun, Nimoy will not only retire from acting, but he also only plans on a few more public appearances, including this weekend’s Calgary Comic and Entertainment Expo.

When asked why he’s decided to retire, Nimoy insist that he’s “been doing this professionally for 60 years” and loves “the idea of going out on a positive note. I’ve had a great, great time.”

Nimoy recently filmed his final episode of Fringe as William Bell, and has no plans to return for the next installment of the Star Trek reboot by JJ Abrams. It is now up to Zachary Quinto to take up the mantel and is “very flattered the character will continue” in more Star Trek films for the next generation.

Despite his retirement from acting, Nimoy admits he is grateful he got to revive the role of the Vulcan first officer in “Star Trek.”

“Since JJ Abrams revived the ‘Star Trek’ franchise, I felt I owed him something. And I’m glad I did it because he promised me a good story, and it was.”