Her first ever statue release through Jerry Macaluso’s PopCutureShock, fans of Randy Queen’s nightmare haunted beauty Ariel Chylde will be in for some happy surprises this May. 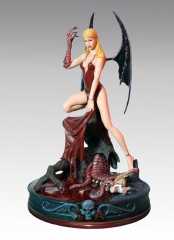 It will be available for pre-order on April 22th through Sideshow, Diamond Distribution Previews, as well as specialty stores.

Also available strictly through SideshowToy.com is an extremely limited version (150 pieces) featuring a light-up base with an MSRP of $225.00.

May is Darkchylde Month

With the triumphant release of the highly anticipated crossover with Top Cow’s The Darkness, and her first ever statue release through Jerry Macaluso’s PopCutureShock, fans of Randy Queen’s nightmare haunted beauty Ariel Chylde will be in for some happy surprises this May. And Darkchylde excitement should hit a fever pitch when test footage for a Darkchylde film created by the Academy award winning Weta Workshop hits the net around the same time.

“The tale of a beautiful, but cursed southern teen who can become any of the creatures from her many recurring nightmares was a bonafide late 90’s sensation, seeing the character realized in comics, trading cards, action figures, skateboards, apparel, mini busts, and more” says creator and writer, Randy Queen, “and it is with great joy that all these exciting new elements are congealing at this time, with the Top Cow Crossover, the Statue from PopCultureShock Collectibles, and the release of the Weta Test Footage. This is a concept fans have have shown they love, and there’s just not that many comic characters not introduced in the 60’s or prior with any real staying power. I’m delighted the plight of Ariel Chylde has endured and proved so memorable for fans around the world, and it’ll be terrific to see where her wings carry her from here.”

For more on Pop Culture Shock Collectibles go to http://www.popcultureshocktoys.com