Good Smile Company has released images of their new Moka Akashiya PVC figure from the popular anime Rosario and Vampire. 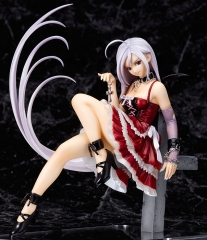 Good Smile Company has released images of their new Moka Akashiya PVC figure from the popular anime Rosario and Vampire. Moka, the vampire heroine is depicted in her awakened state or as Good Smile Company puts it, “Moka’s dark side!” From the press:

The position and costume used for the figure is based on the cover image of the third volume of the Rosario and Vampire manga. She is grasping her rosary in one hand with a sly smile, presenting a beautiful yet mysterious charm. Her long legs stretch out from her mini-skirt are given double the charm by the mirror based stand that she sits upon, and are bound to entrance anyone with their beauty. The chain is made from metal, allowing for a different feel to the normal PVC and ABS figures.

Moka Akashiya Awakened ver. from the series Rosario and Vampire is expected to be released in June wit ha price tag of 8,200 Japanese Yen. Akashiya is sculpted by Hiroshi (Sakurazansen)