We had to be creative—but because of my yoga experience I could get into the right positions to make it work. 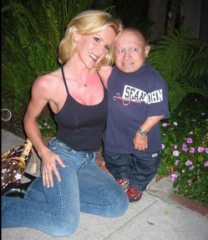 News of the World has brought us the story that none of us ever really needed or wanted to know. It turns out that being under three feet tall doesn’t make you any less of a dynamo in the sack.

That’s right. Verne Troyer, the man you know as Mini Me is a dream come true for his wife, former Playboy bunny, Genevieve Gallen.

Here’s what she told News of The World:
“We had to be creative—but because of my yoga experience I could get into the right positions to make it work. And I was soon head over heels in love with Verne. We could have sex up to 10 times in a single day. We’d do it for 45 minutes and he would just keep on going as I had orgasm after orgasm. He was a sex addict. He was then only the second man I’d ever slept with. He told me he’d had huge numbers of girls.”

Sure, the sex was great, but it wasn’t all lollipops and gimp masks.

Genevieve—who met the 39-year-old Austin Powers star at a New Years Eve party at Hugh Hefner’s Playboy Mansion in Los Angeles—says she felt like Alice in Wonderland when she first went back to Verne’s place . . . a SHED at the the end of his manager’s garden. “It was a little off-putting because everything was so small,” says Genevieve.

“There was a miniature futon and a miniature refrigerator and bed. The light switches were all down at the level of my knee and the toilet was no bigger than a child’s potty.”

Just in case you were wondering… you sick twisted perverts… This is what Genevieve had to say about the first time she saw her little pocket rocket in his birthday suit.

“I was surprised when I saw him naked for the first time that night—I had expected him to be better endowed. But Verne’s body is proportional all over, so he was smaller than I expected.”

If you haven’t lost your lunch yet, you might want to check out the rest of the story. Not only will you find out more about their sex life, but you’ll also hear the dark side of the story, and how alcohol almost killed Troyer.

Click here for the rest of the story: News of the world